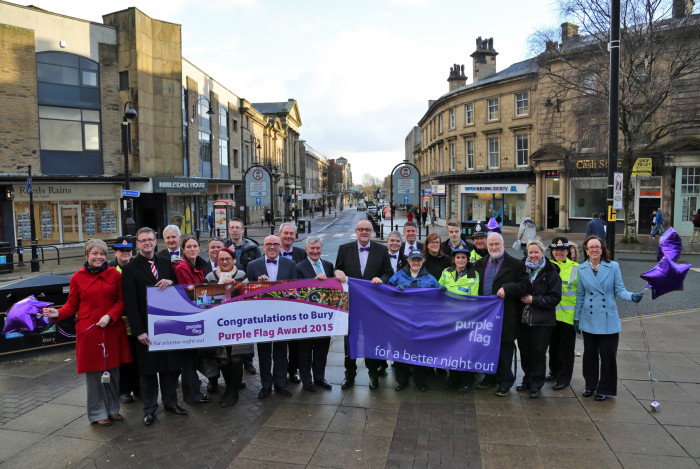 Bury has become the first town centre in Greater Manchester to fly the Purple Flag in recognition of its thriving night-time entertainment.

To achieve Purple Flag status the Bury team had to provide information relating to a number of criteria including cleanliness and safety, movement and transport, the range of attractions, entertainment and events, high quality environment and strong partnership working. This was followed by a late night visit from external assessors to see the town centre in action.

The assessors were particularly impressed with the commitment and evidence of bringing art and culture into the night time economy in Bury. This was seen first hand by the assessors as their assessment coincided with the annual Bury Light Night event in October which this year attracted 25,000 visitors. The assessors also commented on the strong sense of leadership from Bury Council and its partnership with all stakeholders including Greater Manchester Police and the town’s Pub Watch and Street Pastor groups.

Councillor Mike Connolly, leader of the council, said: “We are delighted to receive this prestigious award in recognition of the ongoing excellence of Bury town centre. Purple Flag status reflects our recognition of the importance of the night time economy and builds on our overall approach to ensure that the town centre continues to support the wider economy while also supporting our work on the Greater Manchester Alcohol Strategy.

“Bury was recently ranked third best retail destination in Greater Manchester, after the city centre and the Trafford Centre, and was in the top three in the recent Urbanism Great Towns award. This is further proof that Bury continues to go from strength to strength, outperforming neighbouring towns in Greater Manchester for both our day and night time economies.”

The scheme is managed by the Association of Town Centre Managers working alongside the Purple Flag Advisory Committee – a partnership of key stakeholder groups backed by Government, police and businesses, as well as sponsors Diageo Great Britain.

Since 2007, the programme has awarded Purple Flag status to 54 towns and cities in the UK and Ireland. Purple Flag accredited towns have all reported a consistent increase in footfall and decrease in crime within the night time economy.