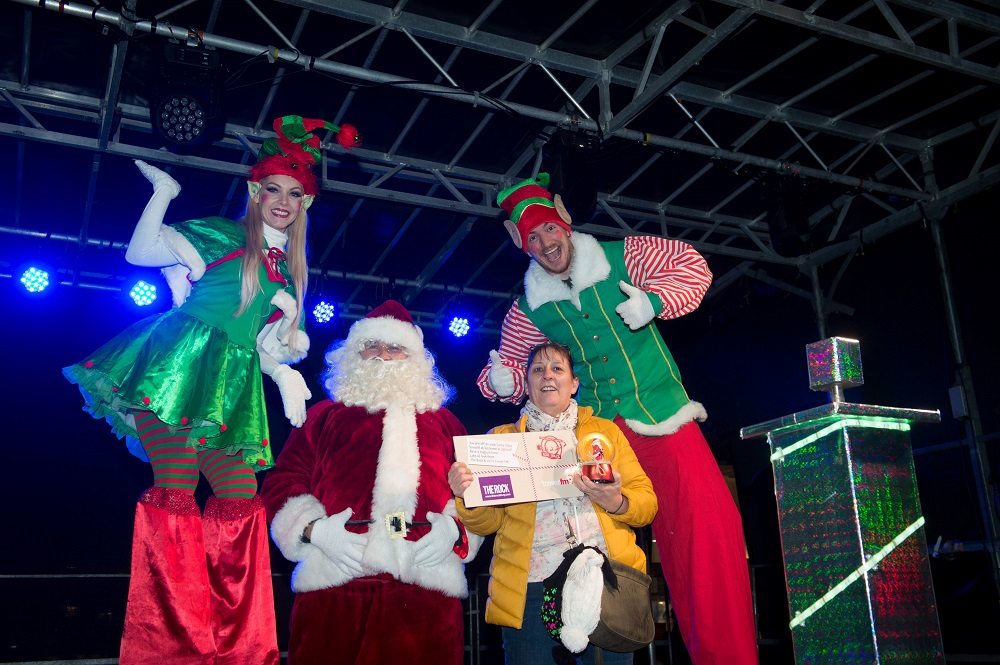 Thousands turn out for The Rock’s Christmas Lights Switch On

The countdown for Christmas in Bury has officially started after thousands of people attended the Christmas Lights Switch On at The Rock.

Our big switch on event in conjunction with Tower FM on Thursday 9th November, featuring a star line up including children’s favourite Mr Bloom from CBeebies and pop sensation 5 After Midnight.

Singers and dancers from The Carol Godby Theatre Workshop and Bolton-singer Emilia also featured in the show, while Santa and his stilt-walking elves mingled with the crowds.

It was an extra special night for Carol Howarth from Bury who won a family trip to Lapland in the centre’s ‘Be Santa, See Santa’ competition. Throughout the evening visitors could have their photo taken wearing a Santa hat and beard at Tower FM’s Santa stations on The Rock.

Just before the lights were turned on Carol found out she had scooped the main prize and was invited on stage to claim it.

Prior to the show starting 10 lucky competition winners were given the star treatment at Debenhams restaurant for a special pre-show party with Mr Bloom and after the show 5 After Midnight met some of their biggest fans.

The event marked the beginning of the Christmas season for The Rock. The centre’s Santa’s Grotto will officially open on Saturday 25th November following the Santa’s Arrival parade in the morning and The Rock Express will return in December to transport festive shoppers around the town until the end of the month.

The Rock’s centre director, Arnold Wilcox-Wood, said: “Our Christmas Lights Switch On has become a firm fixture in the centre’s event calendar and gets bigger and better every year – and this year was no exception. The line-up was a huge hit with the crowd and we gave a way some wonderful prizes throughout the night which were donated by our retailers. The Christmas spirit was certainly alive and well and we were thrilled to see so many families enjoying themselves.”