A lucky shopper is celebrating after winning £1,000 in vouchers following a magical Christmas competition at The Rock.

The shopping and leisure destination marked the launch of its famous land train ‘The Rock Express’ with a morning of festive fun before giving away the prize to Daniel Flynn from Bury.

Following an on air competition with Tower FM – where listeners could win a seat on the first ride of the train on Saturday 2nd December – 15 shoppers were invited to the centre where they took part in a host of games, including Christmas Bingo, The Price is Right and Pass the Parcel, before picking their seat on the train.

Once on board they were told to look under their seat and grab the envelope stuck beneath it – each contained a voucher prize, and the biggest one was for £1,000 of vouchers to spend at The Rock. 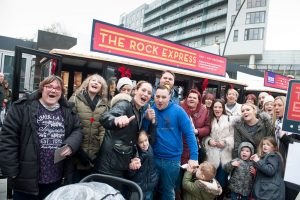 The top prize was scooped by 31-year-old Daniel, whose partner Nicole Wood and three children Lilly-Mae, five, Jacob, two, and 11-month-old Cody were watching in the crowd.

There were tears as Daniel opened the prize and cheers from the rest of the finalists – who each won a voucher to spend at The Rock.

Nicole added: “You’ve made our Christmas – we’re so happy.”

The family were presented with vouchers for stores of their choice and enjoyed a spending spree at The Entertainer, Debenhams, Primark, JD and River Island.

The Rock Express is a free transport service which runs between the Peel Monument (by the Parish Church) and St John’s Square (opposite Costa at The Rock), every day from 10am – 4pm.*

Although this service is free donations are accepted for The Joshua Wilson Brain Tumour Charity.

Arnold Wilcox-Wood, Centre Director at The Rock, said: “The Rock Express is a hugely popular attraction every Christmas and we wanted to mark its arrival in a special way – we’re thrilled to have been able to give away £1,000 in vouchers to Daniel and his family and we hope this will make their Christmas magical!”