Families turned out in their droves on  for a special parade to welcome Santa to The Rock and mark the official opening of the centre’s brand new grotto.

The parade, led by the The Band and Corps of Drums of the Royal Regiment of Fusiliers (Lancashire), also featured festive stilt walkers, children from The Carol Godby Theatre Workshop, representatives from the centre’s charity of the year, Bury Hospice, and local families. 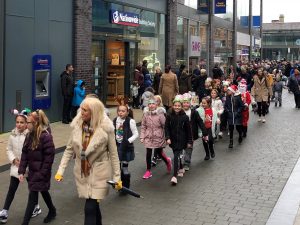 The parade led Santa, who was in a sleigh ridden by an elf, into St John’s Square, where people could then queue to see him and share their Christmas wish lists. 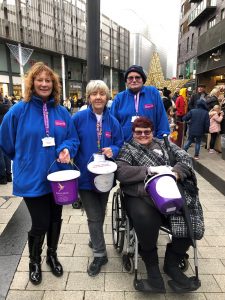 This year the centre has a brand new grotto to give children an extra special Christmas experience. Plus, this year for the first time, on Thursdays Bury Library Service will be running story time sessions from 12-2pm. 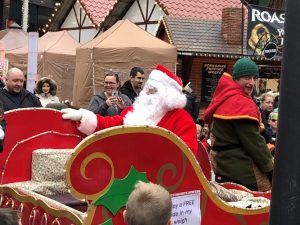 Arnold Wilcox-Wood, Centre Director at The Rock, said: “It’s always so wonderful to see smiling, happy faces at our Santa’s Arrival Parade. We had a wonderful morning and we’re thrilled so many customers turned out to watch. As always The Lancashire Fusiliers did a marvellous job. We hope our visitors enjoy our brand new grotto.”

On Saturday 30th November The Rock Express Christmas land train returns and will run throughout December with donations accepted for Bury Hospice.

Santa’s Grotto is free to enter and open between now and Christmas Eve. Full details and opening days and hours can be found here: www.therockbury.com/christmas

The Rock held its big ‘Be A Rock Star’ Christmas Lights Switch On in conjunction with Hits Radio on Thursday night, featuring a star line up including children’s favourite Sid Sloane from CBeebies and singer Max George. 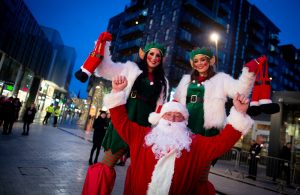 Singers and dancers from The Carol Godby Theatre Workshop and Bolton-singer Emilia also featured in the show, while Santa and his elves mingled with the crowds. 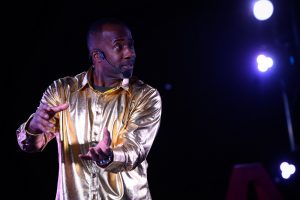 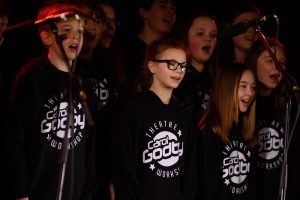 This year the centre revealed its brand new ‘Starry Night’ themed decorations which includes a 8 metre tall walk through star and a stunning Christmas tree in front of Racconto Lounge.

It was an extra special night for Amy Taylor, 29, from Bury, who won a £500 spending spree in the centre’s ‘Be A Rock Star’ competition. Throughout the evening visitors were encouraged to text the word Rockstar to a dedicated number and had to answer the phone with ‘I’m a rockstar’ if they were called by Hits Radio presenter Greg Burns. 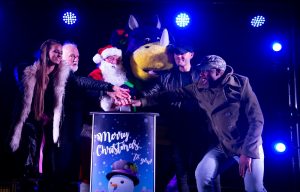 Just before the lights were turned on, mum of three Amy found out she had scooped the prize and was invited on stage to claim it.Amy, who took to the stage with son Leo, 8, said: “Me and my daughter had been there since 3pm, we got here early to make sure we could see. We come to the Christmas lights switch on every year and every year we enter the competition but this is the first time we have a won. I was so shocked when my phone started ringing. This spending spree will make such a huge difference to our Christmas.” 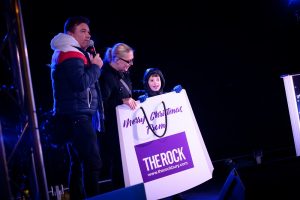 Three lucky winners also won a pair of tickets each to see Hits Radio Live in Manchester later this month.

Prior to the show starting a group of lucky competition winners were given the star treatment at Debenhams restaurant for a special pre-show party with Sid Sloane.

The event marked the beginning of the Christmas season for The Rock. The centre’s Santa’s Grotto will officially open on Saturday 23rd November following the Santa’s Arrival parade in the morning and The Rock Express will return on Saturday 30th November to transport festive shoppers around the town until the end of the month. 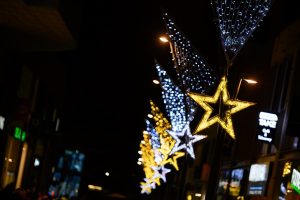 The Rock’s centre director, Arnold Wilcox-Wood, said: “Our Christmas Lights Switch On is always a wonderful night and this year was no exception. Despite the very wet and cold weather, we were thrilled to see so many happy families enjoying our event and our new star-themed decorations and we’re delighted to have been able to give away a £500 Christmas spending spree to Amy.”